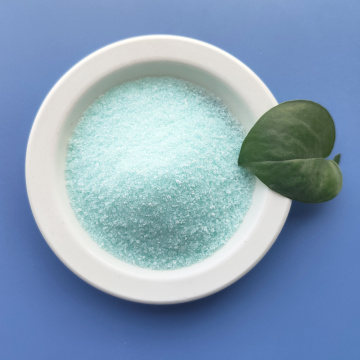 Ferrous Sulfate, Dried, occurs as a gray-white to buff colored powder consisting primarily of FeSO4·H2O, with varying amounts of FeSO4·4H2O. It dissolves slowly in water, but is insoluble in alcohol.

Insoluble Substances Not more than 0.05%.

Lead Not more than 2 mg/kg.

Mercury Not more than 1 mg/kg.

Assay Determine as directed under Assay in the monograph for Ferrous Sulfate. Each milliliter of 0.1 N ceric sulfate is equivalent to 15.19 mg of FeSO4.

Insoluble Residue Dissolve 2 g of sample in 20 mL of freshly boiled 1:100 sulfuric acid, heat to boiling, and then digest in a covered beaker on a steam bath for 1 h. Filter through a tared filtering crucible, wash thoroughly, and dry at 105°. The weight of the insoluble residue does not exceed 1 mg.

Lead Determine as directed in the monograph for Ferrous Gluconate.

Jiangsu Kolod Food Ingredients Co., Ltd.
Jiangsu Kolod Food Ingredients Co., Ltd. is a leading manufacturer of high-purity chemicals in China. We produce phosphates, sulfates, chlorides, citrates etc. mainly food and pharma grade. We have passed ISO 9001, ISO 14001, ISO 22000, KOSHER, HALAL, GMP, FDA certifications. There are 12 workshops in our factory, and we produce dozens of products. Our production capacity is 200,000MTs/year. With stable and superior quality, we have been authorized supplier of Coca-cola, Nestle, Mars Group, Brenntag for years.
Company Info
Email to this supplier